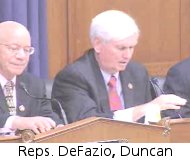 At a congressional hearing Wednesday, members expressed increasingly skeptical views toward the safety claims made by the usual cast of advocates for photo enforcement. The US House Transportation Subcommittee on Highways and Transit invited five representatives of the familiar groups that advocate expanded use of red light cameras and speed cameras. In presentations before the committee and written testimony, however, members seemed to be more swayed by what the two camera opponents that appeared had to say.

"I had never heard, until I read the testimony, about people potentially tinkering with the yellow light period," subcommittee Chairman Peter DeFazio (D-Oregon) explained in an interview following the hearing.

Cities in DeFazio's congressional district, which covers the southwest corner of the state, have not embraced cameras. For that reason, DeFazio said he previously had not given much thought to the issue. The hearing was scheduled at the request of ranking member John J. Duncan (R-Tennessee). The city of Knoxville, which is in his district, uses cameras and has stirred up his constituents.

"A lot of people talked to me about it," Duncan said. "In addition, it was a real controversial thing in the last session of the Tennessee legislature."

Georgia state Representative Barry Loudermilk (R-Cassville) appeared before the committee to testify regarding the controversy in his state over the use of red light cameras and his proposed solution to the problems the machines raised.

"We started realizing that there was a questionable effect on safety," Loudermilk said. "Accident rates have increased at several key intersections in the state... There was a financial incentive created by the use of red light cameras that local governments were no longer induced to seek out proven engineering methods to improve intersection safety. As a result, we passed House Bill 77... The key component of House Bill 77 was requiring an additional second to be added to the yellow time at any intersection that operates photo enforcement."

The benefit of the change was immediate. Violations plunged up to 81 percent and several cities dumped their photo ticketing programs once they no longer were profitable. Dan Danila with the National Motorists Association pointed out how unpopular ticketing programs have been rejected in eleven cities and by fifteen states. DeFazio picked up on the unpopularity by noting that private companies like Redflex and American Traffic Solutions failed to appear at the hearing.

"We did invite vendors, and they refused," DeFazio said during the hearing. "I thought of subpoenaing them, but we have lots of other things to do. I find it disturbing that none of them wanted to come and talk about what a great thing they're doing for America here."

DeFazio suggested he would like to see national legislation to address some of the problems. Such laws would only apply in cases where federal safety grants are distributed to localities to fund the use of automated ticketing machines.

"If you were going to use federal funds for automated traffic enforcement, we want to see that you've gone through a thoughtful process and evaluated other alternatives and that this is for safety, not revenue purposes," DeFazio said after the hearing.