5/14/2018
Australia, Finland, France, Germany, UK: Speed Cameras Thwarted
Dozens of speed cameras were eliminated in Australia and Europe last week, and a man in a chicken costume led a protest in France. 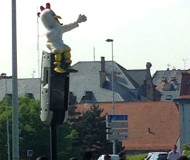 Vigilantes used a burning tire to eliminate the speed camera on Dosthill Road in Tamworth, England on Thursday. According to the Birmingham Mail, Staffordshire Police have no idea who might be responsible. Officials in Queensland, Australia, are upset that the speed camera van that had been issuing tickets at Alexandra Parade on Thursday was smashed around 9:30pm, the Gympie Times reported. On Friday, six speed cameras across Tuusula, Finland, were taken out of service with orange spraypaint, according to YLE.

In Vallecrosia Alta, Italy, on Sunday, one of the orange "Velo OK" brand speed camera columns was ripped out of the ground and tossed aside, La Riviera reported. On the previous Sunday, vigilantes took out the speed camera on Goldbacher Strasse in Gotha, Germany, by spraypainting it silver, according to Thuringer Police.

On Sunday, green spraypaint and a smiley face took out the speed camera on the RN88 in Saint-Paul-de-Tartas, France, Le Progres reported. Blue paint was used on the speed camera in Censeau on Tuesday, according to Pleinair. The same color adorned the speed camera on the RD778 in Locqueltas, Ouest France reported. On Wednesday, an ax was used to smash a pair of speed cameras on the RN124 in L'Isle-Jourdain and RD 634 in Endoufielle. According to La Depeche, these were two of the most profitable cameras in the Gers department. In Strasbourg on Friday, Yannick Krommenacker put on a chicken costume and perched high atop a speed camera with a sign saying he was "tired of being plucked" by automated ticketing machines.