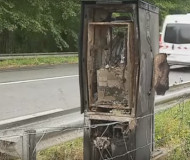 In Cercino, Italy, a man attacked a mobile speed camera that was being manned by a police officer on provicial road 4 on August 3. According to Giornale di Sondrio. The 25-year-old who knocked over the speed camera was taken into custody.