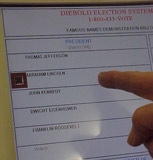 An overwhelming majority of voters in Steubenville, Ohio rejected the city's speed camera program yesterday in a referendum on whether the city ordinance authorizing the program should stand. With all precincts reporting, 76.2 percent of voters said "no."

The program began last year issuing nearly 7000 tickets worth $85 each to motorists driving as little as 5 MPH over the speed limit. It would have generated nearly $600,000 in revenue until Jefferson County Court of Common Pleas Judge David E. Henderson struck down the city ordinance as illegal in March. Because the city is bound by contract to continue the services of German camera operator Traffipax, regardless of the program's legality, it defied the judge's order and reinstated an essentially identical ordinance to continue issuing citations.

Tuesday's vote puts an end to the traffic cameras and serves as a victory for attorney Gary Stern who won a class action lawsuit to return the money that had been illegally collected from motorists. He also gathered enough signatures to put the speed camera question to a vote of the people. The public has never voted in favor of photo enforcement. Between 1991 and 1997, voters turned out in Batavia, Illinois; Peoria, Arizona and Anchorage, Alaska to reject photo radar.